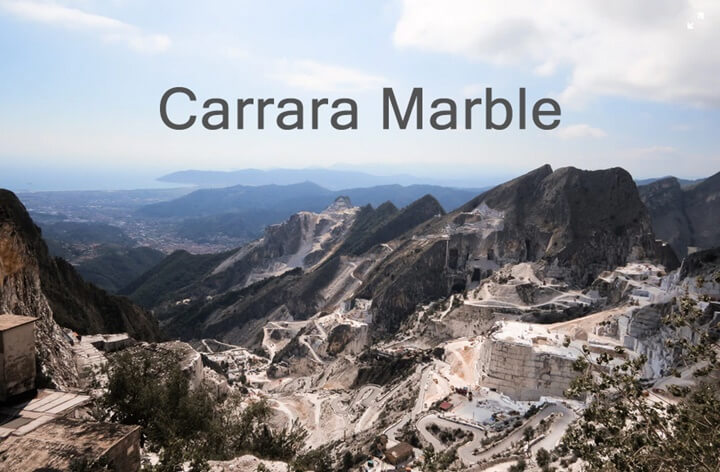 When coming to Italy, the first thing people think of is the fashion capital, Milan Fashion Week, the birthplace of luxury and Renaissance, etc. So what else is best in Italy? Now let’s explore the marble stones from Italy.

The mosque roofs of the holy city Mecca, the altars of the Mormons in Salt Lake City, the magnificent lobby floor of JP Morgan Chase’s New York headquarters, and the golden Kardashian wedding show luxurious furniture. The above cases were all decorated with Italian marble It can be seen that Italian marble is very widely used.

Known as the “Marble Capital of the World”, Carrara, a small town in central and northern Italy, has the world’s most diverse and best-quality white marble. It was a high-end architectural and sculpture material that was popular in Europe during the Roman era and is almost one of the five largest stone mines in the world The most famous (these 5 mines are the Italian Carrara mine in the white system, the Delmar-Kavala-Sos mine in Greece that mines white and gray marble, the MEDEA mine in Turkey that mines in beige, and Rajasthan, India. Mines and mines in Alicante, Spain). 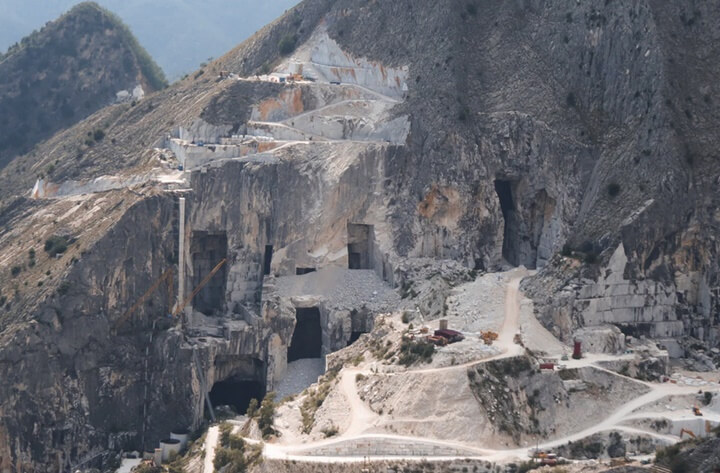 Carrara is a stone city (example: the residents’ benches are made of marble), and the road around the city is well-known as the “Marble Street” (Strada del Marmo). Stone Street is built along the valley: there are many curved roads, many roundabouts, abrupt cliffs, and mountain tunnels.

Bedizzano is a small village in Carrara, Italy, where quarry workers and their families are mainly inhabited. The village is surrounded by many marble mountains.

Finally, you can reach the miner’s village, which has been sleeping for many years: Colonnata. For two thousand years, people have been mining marble from Carrara’s stones, and they have continuously liberated this hidden beauty and created miracles.

More than 500 years ago, young Michelangelo moved to Tuscany in northwestern Italy with his father, where he first saw the “snow” that would not melt in the Alps. This is a type of white stone called “Marmo” by the locals. Its quantity exceeds people’s imagination. From the beach of any nearby town, you can see the snow-covered marble peak. 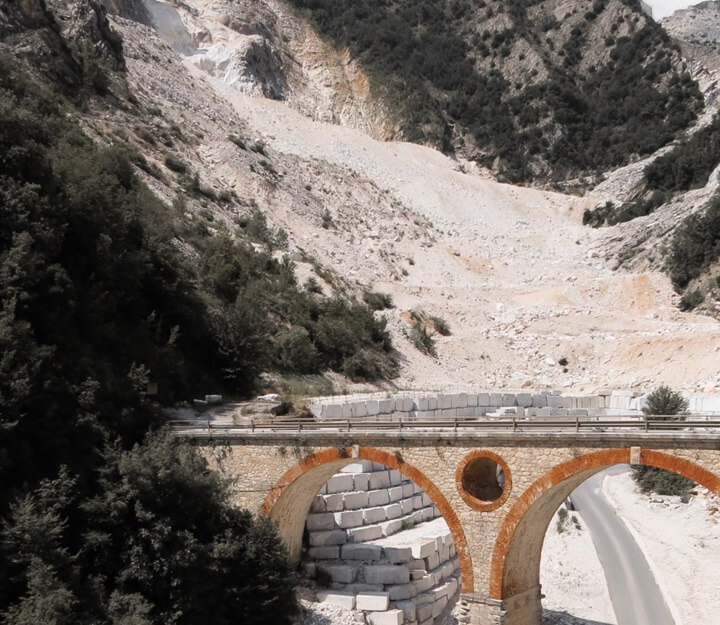 The Italians named the city rich in marble as Carrara, which in Latin means “stone mine”. As early as the Roman period, there were hundreds of quarries, large and small. The ancient Romans did not hesitate to dig the stones here to build the landmarks of the imperial power: the Pantheon, the Colosseum, the Baalbek Sun Temple and so on. Augustus, the founding emperor of ancient Rome, proudly announced that he inherited a stone city but left a marble city. It can be seen in the eyes of the ancient Romans that marble is not a type of stone, and the reason may depend on its rare color.

Among the many quarries in the Apuan Alps, there was once a father belonging to Michelangelo. Under the influence of his father’s mason, Michelangelo learned to use hammers and chisels as well as all other children living in the area. But what is different is that the white stones on the mountains turned into different shapes in his heart. Michelangelo, who was an adult, learned sculpture art from this, and most of his inspiration came from this. The most famous statue in the Florence Museum, “David”, is derived from marble on Mount Carrara. Michelangelo wrote in one of his sonnets: “There is no great artistic idea, only surrounded by marble, and advanced consciousness stops here. It is hand-made under the command of reason.”

Carving 17,000 pounds (7711 kg) of “David” is no easy task, but Michelangelo has a more crazy wish in his heart-he had imagined carving the entire mountain into a statue. However, this is just a romantic image of a Renaissance artist. Michelangelo quickly dispelled this idea and told it to others as a joke. However, in his diary in his later years, something like this appeared: “If I can live four times as long, then I must start to realize this crazy dream.” Life expectancy is limited, but marble does not.

Few materials in the world are mined and used like marble. Photographer Luca Locatelli uses photos to record people living in the Carrara area and working in marble mining.

“This is an independent, isolated world. It is beautiful, weird, and full of grim flavor,” Luca said. In this unique white world, you will find that industry and nature fit together perfectly. In the photo, those fingernail-sized workers stand between the mountains and mountains, directing the operation of the tractor like a symphony orchestra.

The Apuan Alps in Italy is a rare marble mine in southern Europe. The locals have been engaged in the marble mining industry for generations.

Although far away from the city center and away from Italy’s most famous classic buildings, Carrara’s marble deposits still attract the attention of tourists. In recent years, the Italians have launched some thematic marble tourism routes. Absolutely, not only brought a lot of revenue but also brought a lot of marble orders. 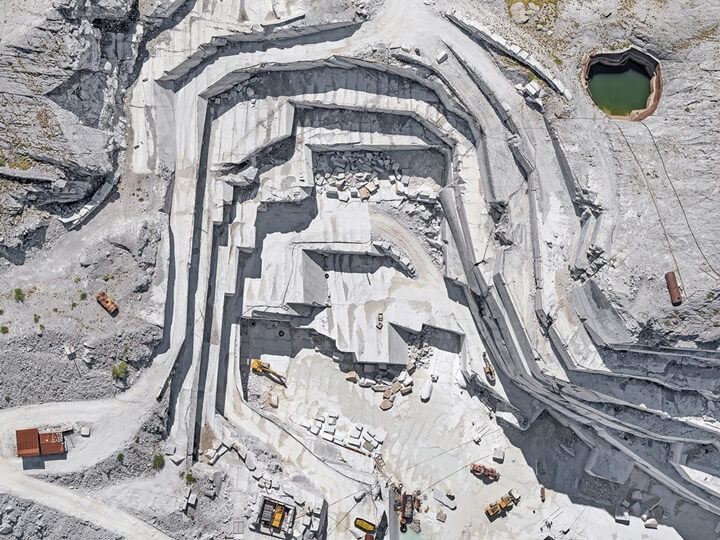 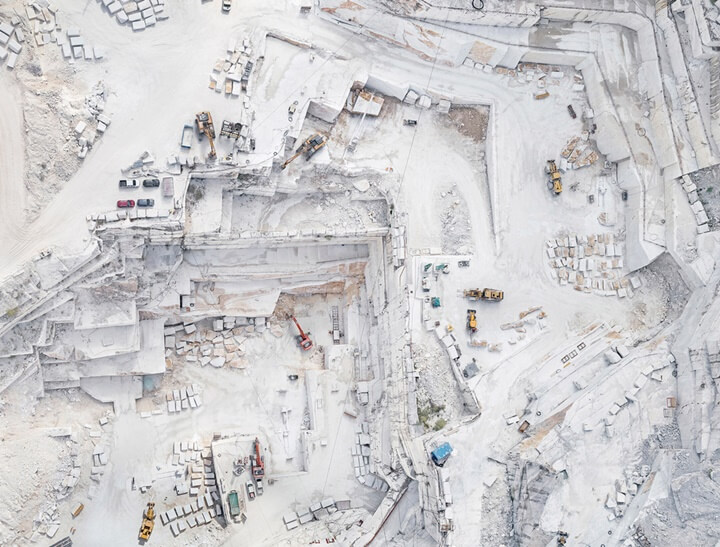 The application of marble is no longer a solitary Renaissance sculpture standing in a museum, but the floor of a lively shopping mall, the luxurious sink of a high-end hotel, the exquisite lobby of a skyscraper, and countless statues of people.

Like most ancient natural resources, marble is not an unlimited resource. Just like North American timber and Antarctic ice cubes, sooner or later, Italian marble will run out. However, the special properties of marble have determined that even if it disappears from the top of the Apuan Alps, it will not perish on the earth. They will be distributed in various forms in various corners of the world. Maybe there is a piece hidden in your home.

Want to save time and money on Importing Marble Stone From Chinese Factory?
Get In Touch 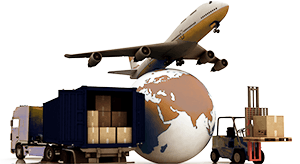